ABC Ch15 News Report Sept. 16, 2020:
"'What do we do with a mass unemployment event.' That was State Democratic Representative Mitzi Epstein back in March in front of legislators before anyone knew what the pandemic might cause."  - see news report Sept. 16, 2020- 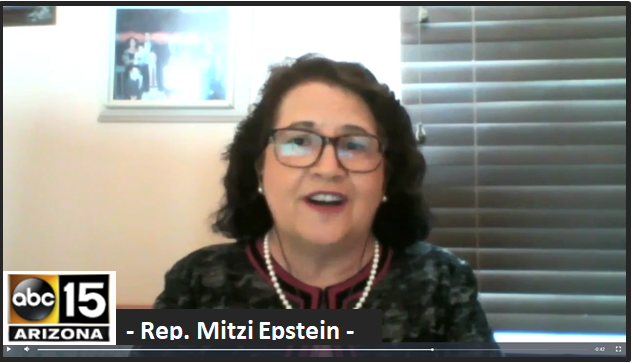 It's true, I do work for long-term plans to avoid crises.  For too long, the Arizona budget and the legislative majority leadership (elected Republicans) have been looking at reacting to crises like chickens running in a yard,
rather than investing in the people who have expertise to make long-term plans for a recession and for a pandemic.

Channel 15 News Investigative Reporter, Joe Ducey looked at the large problems we have with Unemployment Insurance now, and asked, "What has been done?  What have you tried to do?"

I told him that we - The House Democratic Caucus -worked as a team in March calling for better plans to help people during the pandemic. We had budget amendments for food and housing assistance, to stop price-gouging, delay evictions and car repossessions, tele-health, workers' protections, and of course, Unemployment Insurance improvements.  Our plans would have put many of them in place through June of 2021, with the option to repeal if the economy improved.  Instead of working with us, the legislative Republican Leadership chose to not even hear our amendments.  For real-life drama of your Democratic representatives fighting for you, watch the video of the floor debate.

The fireworks in that debate start at about minute #9 - with Democratic Rep. Kelli Butler saying, "I want the people of Arizona to know we've got to do something.  People need help, like the pregnant woman who wrote to me this morning that she would end up homeless if we don't do something."   Rep. Warren Petersen- Republican Leader - repeatedly called the question,  meaning he called to end time for debate or discussion. Around minute 20,  I had to work some parliamentary fancy footwork to get a chance to speak.  I made the case then that we need a plan for a "Mass Unemployment Event" because that is a term that economists use to coordinate crisis plans among states.

Now in September,  our coalition for Unemployment Insurance reforms has good data showing that $490/week would transform AZ UI from a meager allowance, into a mighty economic stabilizer. 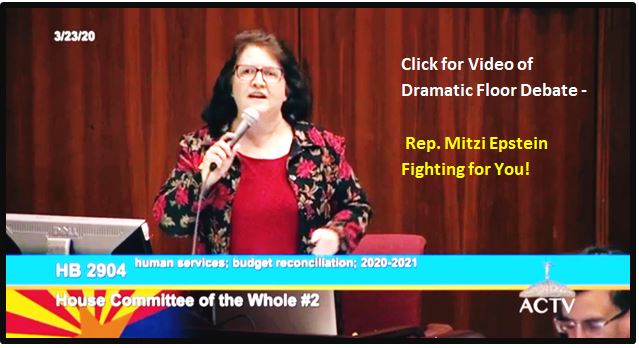 Now Epstein and others want changes including raising the weekly benefit. "We think that should be enough to cover your rent essentially," she says. At $960 a month, current unemployment benefits are below even the average $1,141 Phoenix monthly rent.

Andrew Sugrue with the Arizona Center for Economic Progress is asking legislators to increase the amount to around $490 weekly. "That would bring us in line with states that are our neighbors," Sugrue says. The Center and other organizations listed their recommendations in an open letter to state elected officials. The letter asks the governor for an executive order addressing them.

Right now, minimum wage workers must work an average 30 hours a week to qualify for unemployment. That excludes many part time workers. The Center and others recommend the number of hours people can work and still qualify, should be cut in half. Epstein says currently "it is so low that people don't have an incentive to work."

" That "lack of incentive to work" is also used by people not wanting to raise benefits. They say workers won't want to go back to work. Both Epstein and Sugrue disagree with that. They say with more money in workers' pockets, more money will be spent at businesses and it will help the economy.

State Democratic legislators have called for an investigation into unresolved unemployment benefit claim issues. And they are asking the governor for an independent audit of Arizona Department of Economic Security processes.

As for a governor's executive order involving unemployment benefit amounts, that office tells me "as a budget issue, this would require action from the Legislature. Arizona's constitution prevents a governor from doing this via executive order."